This is the tale often heard by our elders who said that they have heard it from their elders.

There was a pious (Vali) person named ALI who migrated to this part of the world many centuries ago.We don’t know his origin but he is believed to be from Prophetic ancestry (Sayyad).The land surrounding this village was barren ,open and mostly uninhabited.He found lush green land here and decided to live on a high place, where Jumma Masjid stands at present.

Gradually people began to gather at this place, which as yet had no name, to seek spiritual guidance. Whenever people visited Ali’s place they would say “Ali ne ta jawaana” or Ali wara gaam ma jawaana”.The people of the surrounding villages spoke mostly Gujarati,therefor it was common for them to say “Ali-por (gaam) jawaana.

As the people started dwelling around this Buzrug(vali),the place where he had his small tent was converted in to a prayer area and later became a Masjid. That’s how present day Jumma Masjid came to existence. 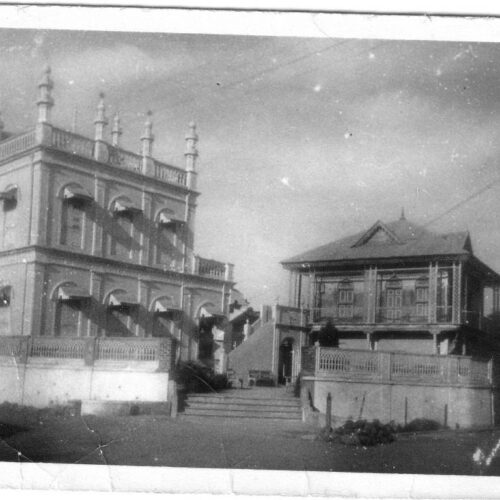 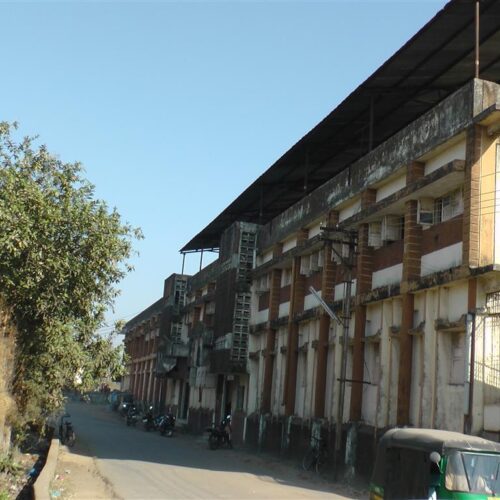 It was assumed that rest of the Buzrug’s clan followed him and they migrated to this lush green area of South Gujarat.They built houses where Matwadia faliya and part of Mullawad now stands, near present day Jumma Masjid.Their mother tongue being Urdu/Persian, they called this settlement Ali-pur(gaam).

With an increasing population of Vohra moving to this part of the world,they also began to built their houses near to the Masjid and soon a new settlement sprung up,Vohra’s mother tongue being Gujarati they called their village ALI-POR

It is also said that many of the families converted to Islam due to this pious person and other buzrug like Adhar Peer Bawa and his eighteen brothers. Alipor is indebted to these great people who had preached humanity ,peace,co habitat with other religion and spread the gospel of true word of the Almighty. No wonder Alipor is surrounded by so many Vali’s Graves in all direction of the village.
If you know any other story,folklore or any bit of history about our village Alipore, please do let me know.

I witnessed the demolition of the hospital. Whilst I was watching the bulldozer destroy the beautiful but derelict building, a question came to my mind. Why was this hospital built? Why it was never finished? Why it was never opened? Finally, why was it demolished? These were burning questions, there must be a reason, an answer, surely something went wrong. , before Aliporean mourns of its demise, let us look at its chequered history. Hospital was an ambitious plan of the late Ahmed mama Mayet (SA) over 40 years ago.

I came across Yusuf bhai Kola who is a nephew of the late Ahmed mama Mayet and was involved in the old hospital project from the beginning. I confronted him, saying “the old hospital is demolished and all the building contents sold for 9 lac rupees“.Yusuf bhai replied “it is a sad day for Alipore and for my late Mama, whose vision never materialised. It was killed even before it started – very sad. I am glad somebody has asked me these questions; let me begin by re-living the beginning”. 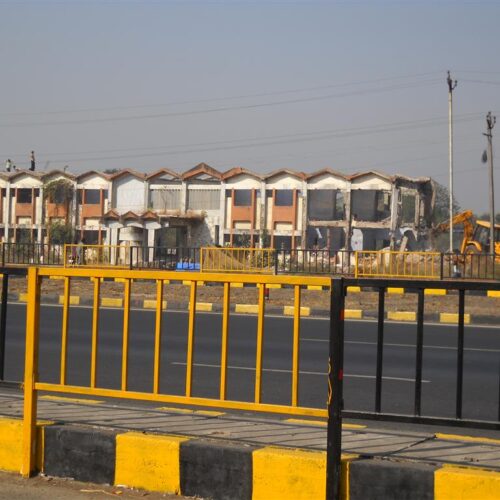 “My Mama came to India on the news of my mother (his sister) being sick. Prior to coming to India he already had a project in his mind to build an IT college in Alipore. He had approached all the influential people like local MPs and others. The project was going to go ahead by the blessing of the late Hassan mama Karolia and other trustees. As my mother became seriously ill, she was moved to Surat Hospital. My mama used to visit her every day thanks to a car (the only one in Alipore) provided by late Hassan mama Karolia. In those days you only had two choices; to go to Surat by bus or train, both took nearly two hours. Every evening as he would come back from Surat and all the trustees of Alipore Jamaat and others would go round to him and talk for hours. One day he came back from Surat as usual and during that evening he said to Hassan mama “Hassan bhai I have changed my mind on building an IT college, instead we will build a Hospital in Alipore”. “But why a Hospital?” they all asked.

“Look, I’ve been given a car to go to Surat every day and I am still tired and breathless. I can imagine how other people go to Surat and other far places for their loved ones for treatment. Why not build a Hospital here in the village? So the poor and the rest of you can have basic treatment here.” We all looked at each other on this wonderful idea. Hassan mama was overjoyed and said “so be it, let’s have a hospital in Alipore.” Now the further questions were asked; who will finance it and who will give land to build it?

“My mama took total responsibility of finance and it was up to the trustees to find suitable land and build the hospital. Somehow it was suggested that the hospital would be better built not far from the then newly built Primary Health centre Hospital in Alipore. So the land next to Alipore talaw (pond) was chosen. Who owned the land? It was suggested that this land belonged to late Ahmed mama Daji Patel. It was agreed that whatever price Ahmed mama asked to be paid would be met, so Ahmed mama was summoned the next day for a meeting. All the trustees were present and it was put forward to Ahmed mama Daji about building a hospital in Alipore and this particular land would be an ideal place for it, and he would be paid his asking price”. Ahmed mama (May Allah give him best of reward) without even blinking said “for such a noble work take it from me, the land is given free, go ahead and start the hospital project“. All those present just start praising Allah SWT. So the land was given, money was available and soon the building work began.

“In the middle of building construction, it was realised that this particular land didn’t belong to Ahmed mama Daji but to someone else. Now what could we do? I was told that Alipore Muslim Association UK and AMA South Africa tried to solve this problem by purchasing land from its owners. The land was either donated or purchased and the hospital construction did finish and we had a beautiful hospital. As was (and IS) usual in the village Jamaats history, none of the properties or land donated to Jamaat ever transferred on to the Jamaats name (ownership). The whole project cost over 3 lac rupees.” I was still puzzled with two other questions!

Why wasn’t it started as a hospital?

Looking back after so many years, I still wonder why it never started. I was prompted to find out the answer to this question. I know the late Hassan mama tried but didn’t succeed, and then other people made a few attempts and failed again. Rumour had it that it was the mighty hand from South Africa that stopped the functioning of this beautiful hospital. Who knows, but the village missed out on all the benefit the hospital could have provided. It was way ahead of its time.

AMA SA and Alipore Jamaat both have no record of either purchase of the land or donation vouch for the land therefore both of them cannot prove of the ownership of the land. When the present named owners realised it that the land is still belong it to their forefathers so they demanded their land back , hence demolishing the old hospital, and perhaps sale of the very valuable land?

Sadly all the trustee of that era from Alipore, UK and SA have passed away, only they knew the truth, did they purchased the land from the owners? Was the land given it to jamaat by the owners? If it was donated or purchased why wasn’t transferred on to jammats name? The fact remain that land was occupied for over 40 years, a building was built and remain there for 40 years so l am going to let you be the judge and jury, over who has the ownership of the land!

How about the land donated by late Ahmed mama Daji? Is that transferred on to Jamaat?

Finally we know Alipore Jamaat received Rs 9 lacs from the sale of the building. Who has the right of ownership of this money? Late Ahmed mama’s family? AMA SA? Alipore Jamaat? Or as I said and remain the only truth that Ahmedmama’s original intention was to build college in the village, now that we are building a new high school, shouldn’t this money be used for this noble cause?

It is well documented that the first Aliporean to migrate from Indian shore were in 1887; I believe most Aliporeans and other people from Gujarat went to South Africa not as a sugarcane workers but to do some sort of business over there. The main factor for my conclusion is by nature these people were farmers, not farmworkeres. By 1895 there were substantial no of Aliporeans in South Africa.

As the community begin to settle, the very first thing they did was to look after the village they just left.

First on their agenda was to knock the old Jumma Masjid down and build a new Jumma Masjid in Alipore. And sure they did with the help of villagers and few rich land owners they built a most beautiful masjid anywhere in south Gujarat.

The welfare concept born, Zakat were utilised to help poor and needy, substantial help was at hand to their relatives.

By 1910 there were other project completed, a new Urdu School, new Madressa annex was built at the jumma masjid , soon one more masjid were built by well off people from Laher mohalla, a madresah started there and also at Mayet mohalla.

Now the village had two masajid and three madresah, a good school. Roads were built; new houses are being built all over Alipore. People from South Africa bought lot of land for their family to farm. By now British rules were well established in India. Public transport by private bus started all over villages.

Alipore Jamat were formed to implement basic Islamic law in to villagers life, there were harmony with other communites.most people make living by farming, growing rice and cattle grass was the main crop with seasonal crop like lentils, monkey nuts, cotton, mango, and wheat also produced.

By 1930 population of Alipore at peak so many new houses were built during the 30s, there were more mouth to feed than land can produce, there were no job opportunities nearby so young people from village look up at bright light of fast growing Mumbai and choose to go there. So many went to Africa and other parts of the world legally or illegally, but so many left Alipore in big numbers.

Alipore Muslim Association in South Africa formed in 1942; Alipore village welfare was firmly thrust upon on all the members in SA. SA totally took village responsibility; there were help at all level of village life.

As political unrest beginning to spread in SA, members realised for permanent income for the village, in 1961 they bought a commercial property in Mumbai for the benefit of the village.

SA closed its door long before Indian independent; Aliporeans were looking elsewhere to earn a living, and by late 50s UK open its door for mass migration, a blessing for the village and during 60s&70s big exodus started towards the UK shore.